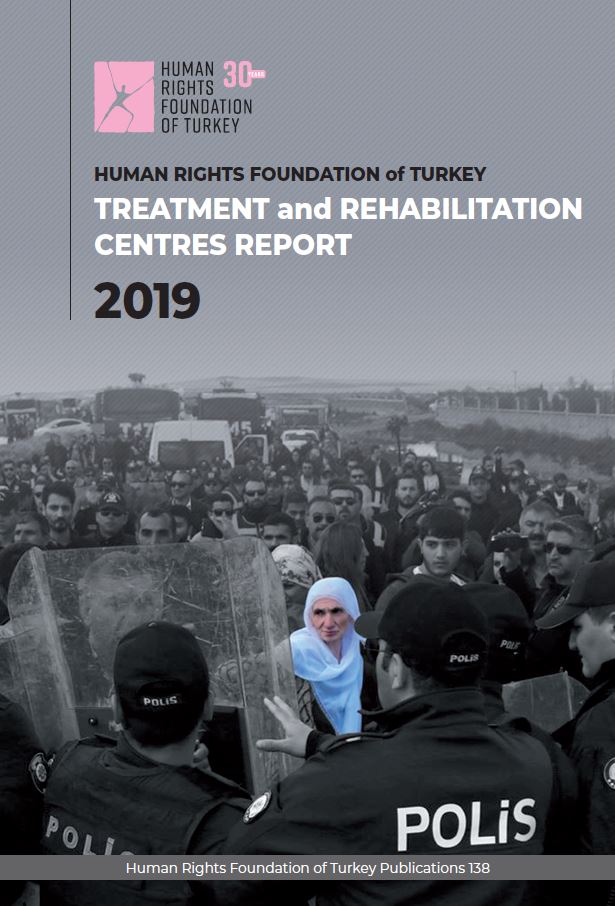 Treatment and Rehabilitation Centres Reports for 2019 was completed in COVID-19 pandemic period. Considering the recent period, COVID-19 pandemic introduced numerous novelties to our life in many aspects. It is necessary to attribute special importance to health workers, who diligently make efforts to fulfil their professional responsibilities, and all other workers/labourers for their invaluable struggle to maintain/remanufacture life in the face of certain limitations resulting from the outbreak.

As regards to some aspects of the pandemic, which is directly related to human rights, the following points might be useful to consider:

On the contrary, these systems and administrations immensely destroy social relations relationship between human and nature.

As our previous reports state, all these pandemic related problems and violations deprive individuals of their rights and harms their status as the holder of these rights and these problems occur under a kind of uncertainty regime where we suffer from legal and political unpredictabilities as well as state of emergency practices that have been already permanent. All these problems increase the importance of the issue for the present and future.

The country has been ruled by the State of Emergency regime since July 2016-there was a direct and official regime at that time; although it is announced that the state of emergency was officially lifted on 19 July 2018, we are still under the same regime for having numerous permanent regulations in force. The fact/situation of a permanent state of emergency led the political power to put the principle of constitutionalism aside so that both the legal system and its institutions turned into an “apparatus” of the repressive regime and the arbitrariness, the uncertainty became dominant

in the public sphere. As the 16th Human Rights Movement of Turkey Conference final declaration foregrounds “The new regime’ power to create uncertainty, which it uses as an administration technique, causes to the legal, political, economic, social and cultural collapse in all levels namely from daily lives to the high political life. It is because the uncertainty regime is not only a form of legal unpredictability but also a climate of fear that individuals determinations are under a continuous threat. Such a climate, on the one hand, causes to build relations based on “distrust” harms collective ties among members of the society and transformed the relationship between citizens and those who hold power-or rulers-into and a type that we can call expectational obedience and into certain types of actions that citizens decide by considering potential orders from these rulers. Furthermore, following the erosion of institutions the impunity-which means limiting the space for struggling against human rights violations-has become dominant, been regenerated and been established almost as a rule.”

inclinations into the society. When there is an atmosphere that systematic violence is not controlled, brought to justice and punished, ignored by political power representatives, on the contrary, it is encouraged by these figures, there is no way to talk about any form of society. The State means an actor that ensures and maintains ties among citizens who have the will of living together. The State turns into a violent structure rather than a genuine State if it harms and unknits these ties. This is a terrifically dangerous and worrying situation.

Under such circumstances, human rights violations are continuously increasing in the country. Some of these violations can be listed as follows: right to life, torture and ill-treatment practices, freedom of thought and expression, freedom of

organisations, security officers use of excessive force, which amounts to “torture”, in demonstrations. Moreover, there is an attempt to create a perception that the exercise of these rights is an exception while violations of them is a rule.

We still observe an increase in torture and ill-treatment practices, the right to health and access to social rights are restricted in prisons. Similarly, problems that seriously

ill-prisoners, children and other disadvantaged groups and disabled individuals continue and become more serious every day.

Human rights defenders, political party leaders, MPs, mayors, scientists, lawyers and journalists are still in prisons. Furthermore, to increase its control and pressure over the society, to spread fear and fright, the political power attempts to make its violent regime more powerful by arresting and detaining lawyers, journalists and social media users.

The local elections, which were held on 31 March 2019, present the current picture of our time and give significant hints about the future. The importance of cautious hope, which many people felt on 31 March and on 23 June when the elections were renewed in Istanbul, is considerably obvious to us. Having said that there are some worrying developments about the election results. As an indication of erosion in institutions and arbitrariness that forces the limits of dreams, some co-mayors, provincial and municipal council members were not allowed to get their power on the ground that they were dismissed from the public services by an emergency decree-law (KHK); even some co-mayors and municipal council members were detained and sent to prions. The founding principles of democracy were violated by replacing these mayors with trustees that means the will of citizens was blatantly ignored by the political power.

Some of these violations were documented by international reports on human rights. For example;

As our previous reports state, we would like to reiterate that “the destructive practices have not been prevented yet despite relentless efforts; however, it does not mean that it will never be prevented.” It is quite natural that a solution to this decay and deterioration requires collective efforts from everyone and depend on the pace towards human rights-based life-style. As a response to various “evil efforts”, such invaluable efforts are the key guidelines for a better world.

human rights defenders, intellectual and İHD’s legal entity in 1990-is a credible and internationally known organization. It has been making contributions to the access to treatment and rehabilitation services for those who have been tortured for 30 years. Also, the HRFT’s purposes include, as Article 3 of the Statute states, periodicals and non-periodic publications, documentation, scientific research and pieces of training to prevent grave human rights/serious violations defined by the international human rights instruments as well as national legislation.

The HRFT currently has four treatment and rehabilitation centres in Ankara, Diyarbakir, Istanbul and Izmir, and two “reference office” in Cizre and Van that began activities respectively on 17 October 2015 and on 13 January 2018.

HRFT’s services to solve the physical, psychological and social problems of torture survivors are carried out by hundreds of professional and volunteer teams from different disciplines, particularly from health officers. The teams have a multidisciplinary approach to these services.

The HRFT has served to 18.370 people, who were subjected to torture and other ill-treatment practices, and their relatives from its establishment to the end of 2019. While we predicted to receive about 480 applications in 2019, it was doubled. Accordingly, there are 908 people, torture survivors and their relatives, who applied to the HRFT treatment and rehabilitation centres in 2019. It is has been classified that 838 out of 908 applications are people who suffered from torture. There are 51 applications from relatives of torture survivors. 19 of these cases were from people who were subjected to torture and ill-treatment practices outside Turkey. The 566 out of 838 applications (67.5 %) were subjected to torture and ill-treatment practices in 2019. Reasons for the increase in the number of torture cases, which is two times more than our prediction, are examined by our colleagues in many aspects. One of the reasons is that the Van reference office, which is a new office, predicted to receive only 50 applications in 2019 yet there were 202 new applications. Hence, it has become important for the HRFT that there is need for transforming the Van reference office into a full-fledged rehabilitation centre.

Furthermore, 145 people applied to our treatment and rehabilitation centres from cities where the HRFT has no office in 2019. These applications were accepted as part of the HRFT policy, which began in 1993, about accepting applications from provinces other than treatment and rehabilitation centres exit. Similarly, 21 applicants benefitted from the rehabilitation program within the scope of the Mobile Health Teams program that we launched in 2008 to respond to the grave/serious torture and other human rights violations occurred in cities that the HRFT offices do not exist.

In line with the need for a multidisciplinary and holistic approach to combat torture and human rights violations, we have prepared numerous alternative medical reports

on torture allegations by torture survivors from Turkey as well as other countries. These reports, which were considered credible by international judicial bodies e.g. the European Court of Human Rights (ECtHR), In this respect, the HRFT has become a school for documentation, reporting and rehabilitation of torture cases. In this context; 87 alternative medical report/epicrisis documents were issued by the treatment and rehabilitation centres in 2019.

The HRFT has played a leading role in drafting “Manual on the Effective Investigation and Documentation of Torture and Other Cruel, Inhuman or Degrading Treatment or Punishment (Istanbul Protocol)” that is recommended by the United Nations (UN) to be used worldwide and is accepted as the standard in forensic examination by Turkey. Due to developments in health and legal fields and new torture methods across the world, the study about the Istanbul Protocol Supplement (Supplement IP to IPS) was initiated by experts. The Istanbul Protocol 2020 Edition was completed in 2019 and submitted to the United Nations Human Rights Office of the High Commissioner. While it was planned to publish the Istanbul Protocol 2020 Edition, which was coordinated by the Physicians for Human Rights (PHR), International Rehabilitation Council for Victim (IRCT), REDRESS, and the HRFT and including UN bodies, in 2020, it is likely that due to the COVID-19 outbreak it might be postponed.

The HRFT either was invited or involved in the organisation of several scientific congresses and meetings since the scientific and objective aspects of its pioneering works on the documentation and treatment of torture are highly regarded and accepted in the international arena.

Most of the people, who are subjected to torture and ill-treatment practices, are affected by other components of trauma. Recognizing the fact that there is need for more than medicine to accomplish the comprehensive treatment as much as possible, the HRFT has been carrying out activities to develop a comprehensive and multidisciplinary program to address issues including the complex and ongoing social trauma since 2004. In this context, national and international training, panels, symposiums and other events and the program to cope with social trauma have been carried out within the framework of three main topics (truth, justice and repair) since 2000.

Considering that democracy and human rights values face a substantial danger in our time and there is need for more efficient prevention and repair of torture and other forms of grave/serious human rights violations, we prepared the HRFT Strategic Plan for 2019-2024 in a collective manner. We benefited from our experience in the preparation and drafting process of the previous strategic plan. We paid special attention to feedback and comments from applicants on our activities as well as analysis of current developments in the country.

The main mission of the HRFT is to fight against torture in all areas of life to contribute to the process of coping with the trauma of torture survivors and physical-spiritual-social well-being of these people. In other words, creating a “social apology” space for people and communities that are subjected to severe human rights violations.

Undoubtedly, we would like to underline that all these activities are a result of collective efforts made by the founding members, executive board members and employees as well as hundreds of sensitive people and experts particularly health officers, lawyers and human rights defenders who come together for a common objective.

The HRFT would like to express its heartfelt thanks to all our friends, in particular the Human Rights Association and the Turkish Medical Association, and organisations that contributed to our activities and did not leave us alone in our activities.