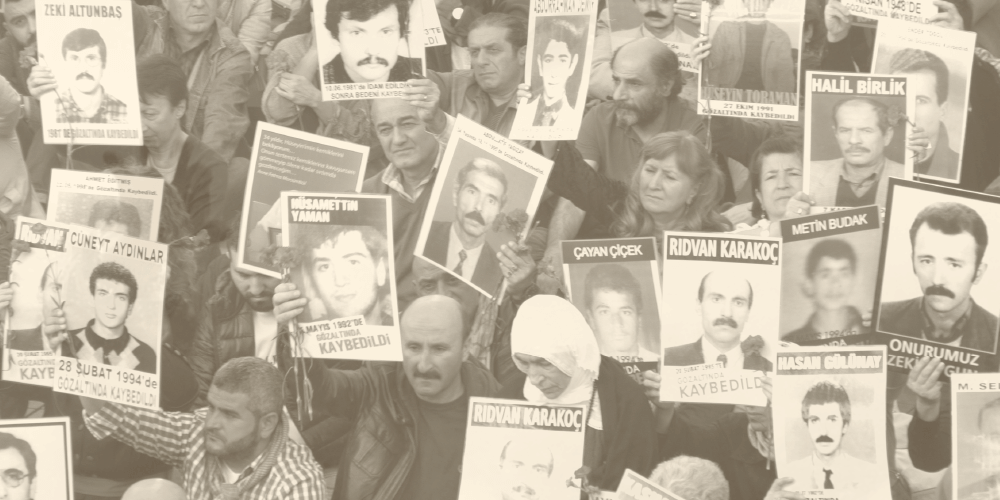 Turkey has been experiencing a deep destruction in democracy, rule of law, and human rights categories particularly in recent years. The armed conflict, which resumed in July 2015, and the State of Emergency declared as a response to the coup- attempt on 15 July 2016-although it has been claimed that the SoE was lifted on 19 July 2018-and also the de facto State of Emergency, which has already become permanent, resulting from the “security law” dated 31 July 2018 causes gross/serious human rights violations.

Taking the limits of the introduction into consideration and having several statements on human rights issues, I will not go into the details of the categories in this section.

Having said that it is considerably relevant to draw attention to the criminal cases against human rights defenders in general and Human Rights Association (İHD) activists as well as the President and executive board members, volunteers of the HRFT; Academics for Peace signatories including the President and several other founders of the HRFT; the Executive Council Members, which include the HRFT board members, Van Representative and volunteers; of the Turkish Medical Association (TTB).

As for 2018, particularly two important developments made the state of emergency permanent/perpetual and deepened the level of destruction of democracy and human rights categories:

As a result, the idea of a rights-based regime was abandoned because of these two developments in 2018; there is an attempt to the legal body to silence and intimidate social groups that do not consent and express their gratitude. The regime, which was institutionalized and tried to be established via the State of Emergency, directs abolish rather than a systematic violation of human rights. The situation, which has become a severe crisis and threatens our humanity, causes destructive impacts on both individuals and civil society, and the society as a whole. The country has experienced a serious political, cultural and economic crisis resulting from, on the one hand, the influence of militarist and pro-war policies inside and outside the country, on the other hand; due to the neoliberal economic policies that have been implemented for many years.

The local elections held on 31 March, 2019 particularly present the present day and give certain ideas about the future. As of the night of 31 March, the value of the hope albeit in a cautious manner, which is felt again in many segments, is obvious for us. However, the destruction of the rules and institutions, which are based on values, has reached a level (although HDP’s candidates were approved by the relevant institution, they were not allowed to obtain their mandate following their success in the elections and HDP mayors were replaced with the other parties’ candidates; the dismissal of the elected mukhtars and appointing trustees to their office; the Supreme Board of Election’s decision to renew the elections of the Istanbul Metropolitan Municipality; all forms of attacks, including the physical one, against people be they party members or not; and the protection of the attackers that normalizes the impunity) that pushes our imagination limits, thus; we all should think about it.

As we mentioned in our previous reports that “although this process, which causes deep destruction, has not been prevented so far, there are three pillars to prevent this process and it is useful to think about them. The first pillar is that beyond the fact that we live in a short period of time within the historical dimension; all this problematic process, as we often say in the field of health, is human-made that is to say-as we underline in the field of medicine-it is not “fate” and can be prevented in a short period. The second pillar is that the human rights movement, which emerged under the “official” State of Emergency, has been accumulating a lot of experience in efforts to “protect and human rights under the extra-ordinary conditions.” It should be highlighted that the experience in question is a very important opportunity. Undoubtedly, the value of this opportunity is closely related to efforts to strengthen the long history of the human rights movement and the concepts per se in the light of fresh experiences as well as a with a critical point of view and to broaden the impact of the human rights movement as much as possible. The third pillar is that there are highly valuable creative efforts, which are not limited with the human rights movement, to overcome this devastation. These efforts are made by different groups in the society. On the other hand, the sustainability of this atmosphere, which is full of “decay” in many levels, has objective limits. Needless to state that the realization of the above-mentioned three pillars will create another pillar to support the efforts.

It should be taken into consideration that even after this deeply destructive process, the effects of the process can last for a long period. For this reason, both protection&promotion of solidarity and cooperation for human rights defenders and improving the impact of their activities constitute a special and existential item in our agenda.

The HRFT, established in 1990 as a result of efforts in Turkish Medical Association (TTB) and Human Rights Association (iHD) circles, was founded by 32 human rights defenders and intellectuals and the legal entity of IHD. It is an internationally renowned human rights organization which has been contributing to access to treatment and rehabilitation services for torture survivors, documentation and prevention of torture. In addition, the HRFT’s purposes include, as Article 3 of the Statute states, periodicals and non-periodic publications, documentations, scientific research and trainings to prevent gross human rights violations defined by the international human rights instruments as well as national legislation.

The HRFT currently has four treatment and rehabilitation centers in Ankara, Diyarbakir, Istanbul and Izmir, and two “reference centres” in Cizre and Van that began activities respectively on 17 October 2015 and on 13 January 2018.

HRFT’s services to solve the physical, psychological and social problems of torture survivors are carried out by hundreds of professional and volunteer teams from different disciplines, particularly from health officers. The teams have a multidisciplinary approach to these services.

The first development is the “new regime” which is the constitutional change and has been approved by the referendum-which was held under an anti-democratic environment-on 16 April 2017 and has come into force following the General Elections’ results on 24 June 2018. Within the scope of the “new regime”, all authorities are centralized by one person viz the President; the guarantees of the separation of powers have been eliminated; the President has been equipped with the authorities to appoint the ministers; to prepare the budget; to elect and appoint most of the judges; to introduce new laws through decrees; the Parliament has lost its function as a political power to operate as a check and balance mechanism; has turned into a simple tool to legitimize/approve the executive power.

In line with the need for multidisciplinary and holistic approach to combat torture and human rights violations, we have prepared numerous alternative medical reports on torture allegations by torture survivors from Turkey as well as other countries. These reports, which were considered credible by international judicial bodies e.g. the European Court of Human Rights (ECHR), In this respect, the HRFT has become a school for documentation, reporting and rehabilitation of torture cases. In this context; 78 alternative medical report/epicrisis documents were issued by the treatment and rehabilitation centers in 2018.

The HRFT has played a leading role in drafting “Manual on the Effective Investigation and Documentation of Torture and Other Cruel, Inhuman or Degrading Treatment or Punishment (Istanbul Protocol)” that is recommended by the United Nations (UN) to be used worldwide and is accepted as the standard in forensic examination in Turkey. Due to developments in health and legal fields and new torture methods across the world, the study about the Istanbul Protocol Supplement (Supplement IP to IPS) is ongoing. It is planned to complete the study, which is coordinated by the Physicians for Human Rights (PHR), International Rehabilitation Council for Victim (IRCT), REDRESS, and the HRFT and including UN bodies, by the end of the 2019 in other words on the occasion of 20th anniversary of the publication of the Istanbul Protocol.

The HRFT has organized many trainings particularly about İstanbul Protocol Trainings and carried out and continues to carry out many scientific studies in Turkey and many parts of the world. Thousands of health care professionals and lawyers attended these trainings Istanbul Protocol Trainings which aim to improve the effectiveness of determining torture and treatment processes.

The HRFT either was invited or involved in organization of several scientific congresses and meetings since the scientific and objective aspects of its pioneering works on the documentation and treatment of torture are highly regarded and accepted in the international arena.

Most of the people, who are subjected to torture and ill-treatment practices, are affected from other components of trauma. Recognizing the fact that there is need for more than medicine to accomplish the comprehensive treatment as much as possible, the HRFT has been carrying out activities to develop a comprehensive and multidisciplinary program to address issues including the complex and ongoing social trauma since 2004. In this context, national and international trainings, panels, symposiums and other events and the program to cope with social trauma have been carried out within the framework of three main topics (truth, justice and repair) since 2000.

Considering that democracy and human rights values face a substantial danger in our time the HRFT Strategy Plan for 2015-2019 period makes special efforts to accomplish the requirements for prevention and repair of torture and other gross/ serious human rights violations.

The HRFT has made special efforts to expand its legitimacy field, to improve activities quantitatively and qualitatively, and to contributions to create space for human rights institutions and dismissed academics and facilitate their activities in this period.

As a result of these developments, the volume of HRFT labour force increased by two and a half times for two years period. Considering the current circumstances, there are special efforts to make the organization of working structure and distribution of tasks transparent in order to accomplish the “quantitative” needs for “labour force” within the HRFT environment. On the other hand, development of “genuine” programs aimed at strengthening future activities “qualitatively” has become a priority subject for the HRFT Strategy Plan for 2020-2024 period. The preparation of the Strategy Plan has begun via the involvement of all units within the HRFT.

The fundamental mission of the HRFT is to fight against torture in all areas of life in order to contribute to the process of torture survivors coping with the trauma of torture and reaching their physical – psychological – social well-being. In other words, creating a “collective apology” space for people and communities that are subjected to severe human rights violations.

Undoubtedly, we would like to underline that all these activities are a result of collective efforts made by the founding members, executive board members and employees as well as hundreds of sensitive people and experts particularly health officers, lawyers and human rights defenders who come together for a common objective.

The HRFT would like to express its heartfelt thanks to all our friends, in particular Human Rights Association and Turkish Medical Association, and organizations that have made contributions to our activities and have not left us alone in our efforts.