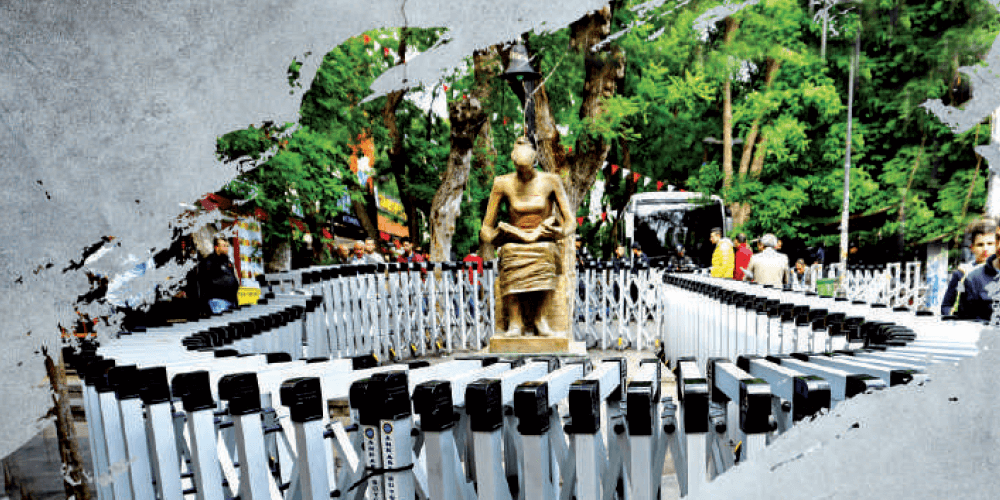 A fundamental fact making its mark on recent years is that democracy and human rights values have been facing a vital threat emanating from the presence of an “authoritarian” political power that is increasingly becoming more established. Comprehensive assessments regarding the human rights conditions that we currently live in were featured in many declarations and reports. The said conditions are summarized in the following paragraph which was featured in the final declaration of the 14th Conference on Human Rights Movement in Turkey, organized by the Human Rights Association (HRA) and the Human Rights Foundation of Turkey (HRFT) on November 24-26, 2017.

“The minimum requirement for coherence and coexistence as a modern society is the ability of citizens to establish relations with each other based on their status as right holders. In the current state of affairs, citizens are deprived of their “right to hold rights”. In other words, they are deprived of their rights to be citizens under the State of Emergency Regime, leaving them unable to establish relations with each other. Depriving someone of their status as right-holding citizens is essentially dehumanizing them. This has become an obvious reality in Turkey and shows a tendency to scale up and become widespread in a way that showcases a global crisis of human rights. Manifesting itself in most parts of the world as an extraordinary state of emergency declared through economic, cultural, religious, ethnic “war” references, this crisis is indeed a humanitarian one.”

The manifestation of this crisis in Turkey and the rest of the world alike is a systematization and proliferation of violence which is imposed upon societies as the sole reality of life.

We wish to reiterate once again that we were not able to prevent this process, which set human rights achievements back by decades. However, the exceptional efforts of human rights activists from various backgrounds to prevent this malicious process and strengthen the human rights environment should be taken into account. When the facts that many of our friends unfortunately lost their lives, got detained, arrested and sentenced, had to leave the country, got expelled from their civil service posts,got prosecuted and had their institutions shut down or suppressed in this process are taken into account, the value of these exceptional efforts against past, present and future contexts become clear.

Although it was not possible, despite all efforts, to prevent this process, which has caused considerable damage, three premises may be laid out for its prevention in a reasonable amount of time. Firstly, beyond the reality that we are only living in a brief time span within the historical timeline, this malicious process can be prevented in a short amount of time since it is man-made and therefore not “fate” as we frequently express in the healthcare sector. Secondly, cumulative efforts of the human rights movement which made its presence felt in the “official” state of emergency environment of the 1980s and has been struggling to “defend and improve human rights under extraordinary conditions” constitute an important opportunity. Undoubtedly, the value of this opportunity is closely tied to the efforts to urgently strengthen the human rights movement and expand its sphere of influence by handling the long history and concepts of the human rights movement with a critical approach in the light of recent experience. Thirdly, the creative search efforts observed among various segments of society to overcome the recent damage, which is not exclusive to human rights, are of great value. On the other hand, the fact that the sustainability of this environment, in which the “rotting” on various levels gets more intense, has objective limits may constitute another premise on its own if the requirements of the aforementioned premises are met.

The fact that this negative process causing such a significant damage may have long-lasting effects even when it is successfully brought to an end should be taken into account. Consequently, it constitutes, as an existential matter, a key item on our special agenda to develop and strengthen solidarity and cooperation among human rights activists in addition to improving the effectiveness of their actions.

In its annual Treatment and Rehabilitation Centres Report, HRFT shares the documentation of physical and psychological treatment and rehabilitation services offered by all its centres to persons exposed to torture and other cruel, inhuman treatment and punishments during the year.

Founded in 1990 by HRA with 32 intellectuals and legal persons advocating human rights as a result of the collective effort by Turkish Medical Association (TMA) and HRA, HRFT is a human rights organization with international recognition and reputation that has been facilitating the access of tortured persons to treatment and rehabilitation services and delivering efforts for the documentation and prevention of torture for 28 years. Moreover, as stated in Article 3 of its statute, HRFT aims to issue periodical or non-periodical documentation and publications, deliver numerous trainings and perform scientific studies regarding the prevention of gross/serious human rights violations as defined in international human rights documents and domestic law.

This service, which HRFT provides for solving the physical, psychological and social problems of torture survivors, is undertaken by professional and volunteer teams of hundreds of individuals from different fields of expertise, health professionals being in the first place, within a multidisciplinary approach.

On the other hand, our work since 1993 for receiving applications from cities where HRFT does not have treatment and rehabilitation centres has continued during 2017. To that end, 109 torture survivors applied in 2017. Under our “Mobile Health Teams” program which was launched in 2008 to target regions where gross/serious torture and other human rights violations were experienced and where we do not have centres, 13 applications were referred into the rehabilitation program in 2017.

As required by the holistic and multidisciplinary approach to struggle against torture and violation of rights, HRFT drafted numerous alternative medical reports for documenting torture upon the request of tortured persons from Turkey and various countries around the world. These reports are recognized and respected by many international judicial bodies such as the European Court of Human Rights. To this end, HRFT has emerged as a school of practice in terms of documenting/reporting torture and treating torture survivors. In the same vein, alternative forensic reports/ epicrises were prepared by our Treatment and Rehabilitation Centres for a total of 80 applications in 2017.

HRFT played a leading role in the preparation of the “UN Manual on the Effective Investigation and Documentation of Torture and Other Cruel, Inhuman or Degrading Treatment or Punishment (The Istanbul Protocol)”, which is recommended for global use by the United Nations (UN) and considered as the standard by the Republic of Turkey in forensic examinations. HRFT has also been organizing Istanbul Protocol Training Courses attended by many medical and legal experts both in Turkey and around the world.

The work on the Supplement to IP-IPS has been initiated due to recent developments in the fields of law and health as well as the emergence of new torture methods around the world since the Istanbul Protocol was initially prepared 19 years ago.

This effort, which is coordinated by the Physicians for Human Rights (PHR), International Rehabilitation Council for Torture Victims (IRCT), REDRESS and HRFT with the inclusion of UN bodies, is planned for completion in 2019 on the 20th anniversary of the Istanbul Protocol.

HRFT’s leading work on documenting torture resonate with and is recognized on the international arena from a scientific and objective point of view. In addition, HRFT has been invited to or organized, on its own initiative, various scientific congresses and meetings.

Many survivors of torture and other forms of ill-treatment are also affected by other components of complex trauma. HRFT is aware that medicine per se is not sufficient to attain redress to the greatest extent possible. Therefore, since 2004, HRFT has been conducting work to develop a holistic and multidisciplinary program that also handles the problem of complex and ongoing social trauma. In this context, since 2000, it has been delivering its program on coping skills for social trauma under three interrelated pillars (truth, justice and redress) through various events such as national and international trainings, panels and symposia.

In order to regularly monitor the violations of rights in Turkey, reveal them rapidly, accurately and continuously and thus prevent them, HRFT publishes in two languages (Turkish and English) daily and annual human rights reports as well as reports dedicated to special violations and events. In this scope, HRFT has developed an objective and reliable system for the documentation of gross/serious human rights violations, especially torture, and has established a key base of know-how.

Special efforts are made in consideration of the HRFT Strategy Plan for 2015-2019 for the prevention of torture and other gross/serious human rights violations and to meet the requirements of the rehabilitation process at a time when democracy and human rights values face an existential threat. To this end, the volume of HRFT work has increased by two and a half times at least for the next two years, especially under the impact of our three recently-approved projects. When the existing conditions are taken into account, it is naturally required to clarify the organization of work processes and the distribution of tasks in order to meet the exigencies caused by the “work” volume of HRFT quantitatively increasing two and a half times. On the other hand, the development of “authentic” programs for the “qualitative” strengthening of our work in the upcoming period has been a primary item on our agenda.

The main mission of HRFT is to contribute to the struggle for the eradication of torture in all spheres of life and enable the attempts by tortured persons to cope with the trauma they endured and attain a complete physical, psychological and social recovery and wellness. In other words, HRFT aims to establish an environment of “social apology” towards the individuals and communities who have suffered from serious human rights violations.

We wish to reiterate that these are the collective efforts of the founders’ committee, board members and personnel of HRFT, who have been serving with great selfless devotion both tangibly and intangibly for years, and hundreds of conscious people from different segments of society and various specialties, especially health professionals, lawyers and human rights activists who united throughout the country for the same cause.

Once again, we would like to extend our sincere gratitude to all our friends who contributed to such work and did not leave us alone, and to all relevant institutions, especially the Human Rights Association and the Turkish Medical Association, for their support since the beginning of our efforts.