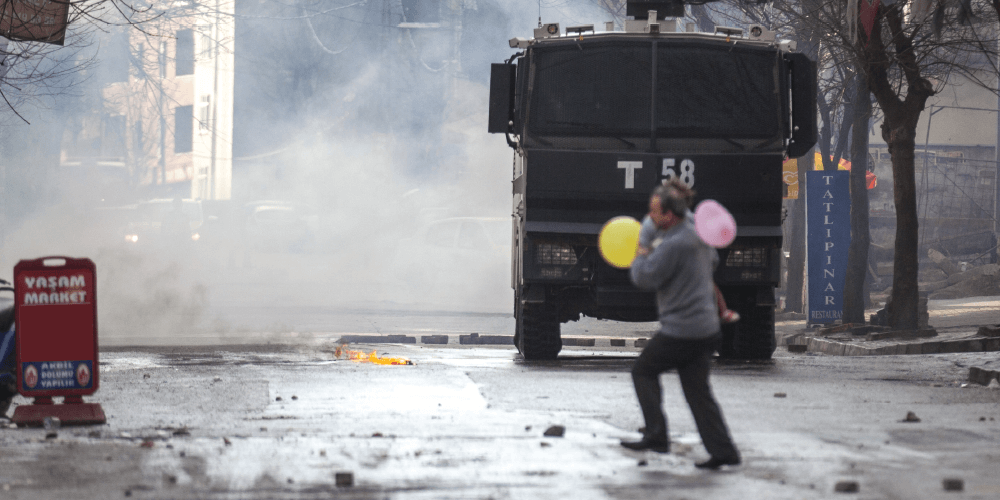 The year 2015 was a year when the democratic life extremely contracted; a year that witnessed from July onwards, the resume to clash environment, within which we lost close friends, and the practice of continuous curfews that are even difficult to imagine. To what extent is it possible to draft the report of such a year – and that is with all its spirit-? Therefore, as your friend bearing the duty of presenting this work, I would like to extend my apologies for shortcomings concerning what should have been done, as well as those of the present report.

Each person is invaluable, each human being is invaluable, natural environment within which we are living is invaluable. Keeping these in mind, our beloved friends Tahir (Elçi), who was among the founders of Human Rights Foundation of Turkey, and Aziz (Abdülaziz Yural), our Cizre reference centre volunteer, who lost their lives in the conflict environment that was re-launched in July 2015, are invaluable.

After dear Tahir and Aziz, can we really keep on with the “everyday life”, saying “where were we?” Hadn’t we said “so late we are” after getting the news of each one? We, however, were so willing to work together with these beautiful people to end the agonies, to relieve the pains experienced in such an atmosphere. How are we going to move on WITHOUT THEM? How are we going to keep on with our “everyday lives” with such a pain?

We will hold on to each other even more strongly than before, and in any case, will find channels to end these unsupportable pains. We will bind up our wounds to the extent possible, and we will ensure that the responsible people for all of these are accountable one day.

2015 was a year, when the democratic life was under immense pressures, and when severest human rights violations in our recent history occurred under the impact of the re-launched clash environment. Without doubt, the most urgent agenda is to reach an environment without conflict.

Alongside this agenda of first priority, we endeavoured to strengthen HRFT’s work under the following four headings:

1. Work towards prevention of torture and other severe human rights violations, which is the main raison d’etre of HRFT
2. Work towards ending the atmosphere of conflict, and particularly “the incessant curfews”
3. Work for the process following the end of “incessant curfews”
4. StrengtheningespeciallyHRFTDiyarbakırTreatmentCentreandCizreReference Centre’s works by also considering changing the methods of the Foundation by taking into account the clashes.

It should be highlighted that despite limitations, the whole HRFT environment is in an overwhelming effort to conduct high quality work, while on the other hand experiencing a deep feeling of belatedness and of inadequacy in the face of the developments in our country, which are even difficult to imagine.

We would like to once again express that Human Rights Foundation of Turkey (HRFT) was established on 1990 with the purpose of providing physical and psychological treatment and rehabilitation services to individuals subjected to “torture and other cruel, inhuman, or degrading treatment and punishment”, and of documenting human rights violations.

This service, HRFT provides for resolution of the physical, psychological, and social problems of the torture survivors, is undertaken by professional and volunteer teams of hundreds of individuals from different fields of expertise, health professionals being in the first place, and with a multidisciplinary approach.

Through numerous trainings, scientific studies, and activities for the improvement of the quality of treatment and rehabilitation services, HRFT has become an important experience-hub regarding the documentation of traces of torture and treatment of torture survivors. HRFT’s leading role in the processes of formation of Istanbul Protocol -the sole guideline with an international scope for the investigation and documentation of torture, and other cruel, inhuman and degrading treatments and punishments-, its acceptance as a UN document, its promotion worldwide, and of provisioning of relevant trainings, is only a tangible example of this.

Alongside the treatment and rehabilitation services, HRFT has provided legal support to torture survivors, directly with its limited means, or on a voluntary basis through its lawyers, in scope of its activities for prevention of torture. HRFT has also developed an objective and reliable system for the documentation of severe/ serious human rights violations, torture being in the first place, and as such, formed an important knowledge accumulation.

Many survivors of torture and other forms of ill-treatment are also affected by other components of complex trauma. HRFT is aware of the fact that more than medicine is needed to achieve redress to the greatest extent possible. Therefore, since 2004, HRFT is conducting work for developing an integrative and multidisciplinary program that also handles the problem of complex and social trauma.

As a culmination of the preparations that began on 2014, HRFT Cizre Reference launched its activities on 17 October 2015, at the same workplace with the Şırnak Medical Chamber. Unfortunately, the 79-days incessant curfew in Cizre between December 14 – 2 March 2016, has not only affected our work but also our workplace. We are spending effort to strengthen our work in Cizre, which is now more meaningful than before.

In addition, following the bombing attacks on 20 July 2015 in Suruç, on 10 October 2015 in Ankara, and on 19 March 2016 in Istanbul, “Psycho-Social Solidarity Network” activities have been launched mainly on the basis of cities, and together with the institutions carrying out work towards individuals affected by the concerned bombing attacks (HRFT, Psychiatric Association of Turkey, Turkish Psychological Association, Psychologists for Social Solidarity, Turkish Medical Association, Association of Social Workers, Trauma Studies Association, and Couple and Family Therapies Association), and these works have been strengthened over time. Alongside applicants subjected to torture, and other forms of ill-treatment, HRFT received 47 applications due to the Suruc bombing on July 20, 2015, and 255 applications due to the bombing attack at the Ankara train station on October 10, within the scope of Psycho-Social Solidarity Network.

On the other hand, “five cities” program carried out since 1993, for the reception of applications from cities where HRFT does not have treatment and rehabilitation centres, has continued during 2015. 63 out of 69 applicants within the scope of this program in 2015, are applicants of our Diyarbakır centre. Again, “Mobile Health Teams” program targeting regions experiencing severe/serious torture and other human rights violations and launched on 2008, was carried on in 2015. We have tried to enrich psycho-social activities for Yazidis, Diyarbakır Fidanlık Camp being in the first place, despite the limitations.

Alongside treatment and rehabilitation work, several trainings (Istanbul Protocol Training programs within the country and abroad; trainings in the field of trauma including art therapy) and scientific studies (“22-year Trends in Torture in Turkey”; “The place of bone scintigraphy in the diagnosis of torture”; “Comparative Study of Legal Framework of Torture in Turkey and Israel”; and publishing certain scientific studies that have been previously completed, etc.) have been conducted in 2015, within the scope of “Treatment and Rehabilitation Project”.

Again alongside treatment and rehabilitation work, integrative activities for prevention of torture are strengthened. Within this scope, alternative forensic reports/epicrisis are prepared by our Treatment and Rehabilitation centres on 2015. Work is carried out for the actualization of an effective National Prevention Mechanism, a requirement of UN Optional Protocol to the Convention against Torture (OPCAT), which offers an important opportunity for the eradication of torture.

We have also drafted the “Report to the UN Human Rights Council Universal Periodic Review (2nd cycle)” and presented it to the UN Council of Human Rights’ session on Turkey, that took place on 29 January 2015. Beside, preparations for the “Alternative Report to the UN Committee against Torture for its Consideration of the 4th Periodic Report of Turkey” have been carried out. Within the scope of the treatment and rehabilitation project, joint works with our partners in Palestine and Israel, have been strengthened.

In order to achieve our ultimate goal mentioned above, the main mission of HRFT, is to contribute to the struggle for eradication of torture in all spheres of life, to the coping by torture survivors with the trauma they experienced, and to a full recovery – physical, psychological, and social- of the torture survivors, in other words, to create an environment of “social apology” towards the individuals and communities who have been subjected to severe human rights violations.

We would like to express that, by no doubt, all these works are a result of joint efforts of members of the Founders’ Committee and the Board of Directors, and HRFT employees, alongside hundreds of sensitive people from different social segments and different areas of expertise gathered together for the same cause, particularly health and legal professionals and human rights defenders from all over the country.

We once again extend our gratitude to all our friends who contributed to these works and who did not leave us alone, and to all concerned institutions that supported our work Human Rights Association and Turkish Medical Association being in the first place.