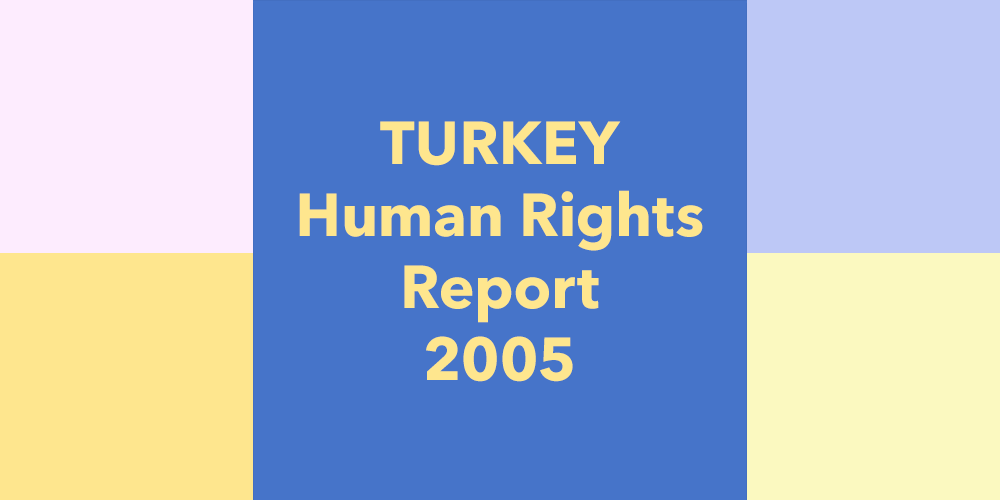 On 3 October 2005 the negotiations for full membership of Turkey to the EU started officially. While this mainly political decision put Turkey closer to the EU it also meant that the government of the Turkish Republic met the political Copenhagen criteria with the legal changes and that the situation in Turkey regarding basic rights and freedoms corresponded with the European norms.

For the historic year 2005 the Documentation Center and the Treatment Centers of the Human Rights Foundation of Turkey (HRFT) shall tray to evaluate the human rights situation in Turkey.

The Right to Life and Personal Security
The findings of the Documentation Center show that five people died in custody. Hundreds of people were torture or ill-treated. At least 376 people were killed by means of extra-judicial execution, shootings on a disregard of stop warnings, the arbitrary fire of the security forces, in prison, as the result of attacks from illegal organizations, political killings or because of mines and bombs.

In 2005 a total of 675 people applied to the treatment and rehabilitation centers of the HRFT because of torture. Among the applicants to the centers in Adana, Ankara, Diyarbakır, İstanbul and İzmir there were 13 children. A total of 193 people alleged to have been tortured in 2005.

The shortening of the period of detention, an increase in contact to a lawyer are positive developments but not sufficient to eradicate torture. Despite the announcement of the government of a “zero tolerance” against torture and some legal provisions the tendency that torture does not result in criminal, administrative and practical punishment contributes to the fact that torture continues.

The trial against 16 police charged in connection with the death of a person that had been detained during a raid on the offices of HADEP in Kocaeli on 20 November 1998 and who died because of the torture inflicted on him concluded in 2005. Kocaeli Heavy Penal Court No. 2 acquitted nine police officers and sentenced the other seven to 20 months’ imprisonment.

On 33 April 2005 İskenderun Heavy Penal Court acquitted three police officers and their chief in connection with torture of two girls who had been detained in March 1999. The court ruled that there was not sufficient evidence for a conviction.

Freedom of Thought and Expression
Having passed the GNAT on 26 September 2004 and entered into force on 1 June the Turkish Penal Code (Law 5237) was revised on 29 June and 40 Articles were changed. The amendments included the provision of up to three years’ imprisonment for oral or written statements in an attempt to influence trials or interrogations. For the offense of “insult against the basic national interest” under Article 301 TPC foreigners were added to the list of possible offenders. In the years before Article 312 and 150 of the TPC had been used in trials against writers, journalists and human rights activists, since 1 June the Article 301, 288 and some other provisions are used to open such trials and in some cases convict the defendants.

During a speech of Foreign Minister Abdullah Gül during the debate on the budget on 21 December, he stressed again the in Turkey nobody would go to prison for expressing an opinion that did not include violence or an insult and maintained that the freedom of expression was protected. However, the report of the Union of Publishers stated for 2004 and the first half of 2005 a total of 25 publishers had been on trial for 43 books written by 37 different authors. The report stated that eight journalists were still imprisoned. In a positive step Birol Duru, a reporter with the news agency DİHA and the HRA member Daimi Açığ who had been imprisoned when they tried to take the picture of a field of cannabis, were released on 29 December to be tried without being remanded.

The Documentation Center found out that during December a total of 38 people including two politicians, 20 journalists and editors-in-chief, three human rights defenders, two reporters, two TV directors, one news agency, six publishing houses, one translator and one photographer were tried. In addition, the offices of the daily Özgür Gündem were raided.

The Freedom of Association
While the court case against the board of the HRFT continued a trial was initiated against the representative in Adana and the physician recording the applications. Between November 2004 and the end of 2005 a total of 55 court cases and six investigations were launched against the branches of the HRA in Malatya, Van, Trabzon, Hatay, Bingöl, Siirt, Urfa, Adıyaman, Batman, Mardin, İstanbul, Diyarbakır, Tarsus and İzmir. Since the branch in Bingöl had been founded in 2001 until July 2005 the prosecutor had investigated in 92 cases and brought charges in 51 of them. In 2005 officials of the HRA continued to receive oral and written death threats.

Together with six organizations and individuals, we left the Human Rights Advisory Board (HRAB) that had been founded with the aim to share the problems related to human rights with NGOs, to take joint decisions and take legal measures, but never asked for advice or opinions.

The public prosecutor indicted the former chair of the HRAB, Prof. Dr. İbrahim Kaboğlu and Prof. Dr. Baskın Oran for the report on minorities they had prepared in October 2004. They were charged under Article 301 new TPC with incitement to separatism and humiliation of the judiciary.

Some examples in the area of freedom of expression are:
On 27 October the case concerning the closure of the teachers’ union Eğitim-Sen was rejected for the third time. The General Assembly of the Judicial Court of Cassation had quashed the earlier decisions stating that it was a Constitutional provision that education could not be held in any other language than Turkish. The Court of Cassation will have to deal with the case once again.

In March Abdülmelik Fırat, President of HAK- PAR and 12 board members were indicted because they sent invitations to the State President, the Prime Minister and the President of the GNAT in Kurdish and spoke in Kurdish during the General Assembly.

The Prisons
In 2005 another six prisoners went on death fast. According to the findings of the Documentation Center at least 10 prisoners, three of them political, died in prison because of illness, hanging or burning themselves or being beaten to death by other prisoners. During the year 233 prisoners applied to the HRFT after release. Their applications show the devastating result of isolation in prison.

The Şemdinli Incident
The events in Şemdinli and Yüksekova district of Hakkari province in November showed once again that the conditions of the state of emergency practically continue in the region. Strong evidence was found that the bombing of the bookshop in Şemdinli was carried out by a form of organization resembling the Susurluk gang. Police officers tried to hinder the prosecutor to collect evidence in shooting at the crowd; two of the three suspects were sergeants of the intelligence of the gendarmerie (JİT or JİTEM) and one was a defector; they had come in a car belong to the gendarmerie; in the car a list of people to be killed was found; all this is evidence for such an organization. The Commander of the Army stated that he knew one of the sergeants personally as a good man. This raises suspicion that they acted within the structure of orders.

During protest demonstrations in Yüksekova the police opened fire on the demonstrators and killed four of them. Seven police officers and many demonstrators were injured. Another example for the practical continuation of the state of emergency that prevented the investigation of human rights abuses is the trial of village guards, soldiers and defectors at Hakkari Heavy Penal Court. The Court passed its verdict on 18 November. It sentenced the defector (former PKK member) to 8 years and 4 months’ imprisonment and acquitted the other 12 defendants including high-ranking officers.

“Active Monitouring for Democracy” Project
On 1 January 2005 the Documentation Center of the HRFT started the Active Observing Project for Democracy. The project will last until 30 March 2006 and had three main areas:

General Evaluation
It is important to note that worldwide human rights abuses were reported in 2005. The CIA organized flights from countries outside the USA for suspects of terror to be taken to torture chambers and allegations were raised that CIA agents interrogated suspects under torture in Turkey.
Members of the security forces violated the right to life by killing civilians during demonstrations. Despite some positive steps against torture under the slogan of the government “zero tolerance for torture” there was no serious will (intention) to eradicate torture and deaths under torture continued.
The judiciary continued to protect suspects of torture, killings, drug trafficking and gangs founded on State level. Only few trials were initiated and in very few of them sentences were passed, but on the lowest level. Impunity continued as the rule.

The field of freedom of expression continued to be a filed of mines. Provisions to persecute opponents and silence them were reproduced, but each change of the TPC was presented as a step towards democracy. We hope that the trial against Orhan Pamuk has taught a lesson to the officials.
In a similar way the freedom of association is under threat. Trade unions, associations, professional organizations, foundations and political parties were subjected to administrative and judicial pressure.

Heavy conditions continued in the prisons. Political prisoners were subjected to isolation.

The Prime Minister talked about the Kurdish question, but no step was taken towards a solution. Regional measures to fight poverty and unemployment and to compensate the losses of the people were not taken.

The pressure on human rights organizations and activists continued. The civil society was invited to some meetings, but not included in the decision taking process. While the NGOs were left aside the influence of the military on political life was accepted.

Despite all these negative facts social dynamics were able to realize reactions and spend efforts for informing and encouraging the government. We hope that the new year will be a year of improvement of human rights, democracy, peace and welfare and that the problems will diminish.