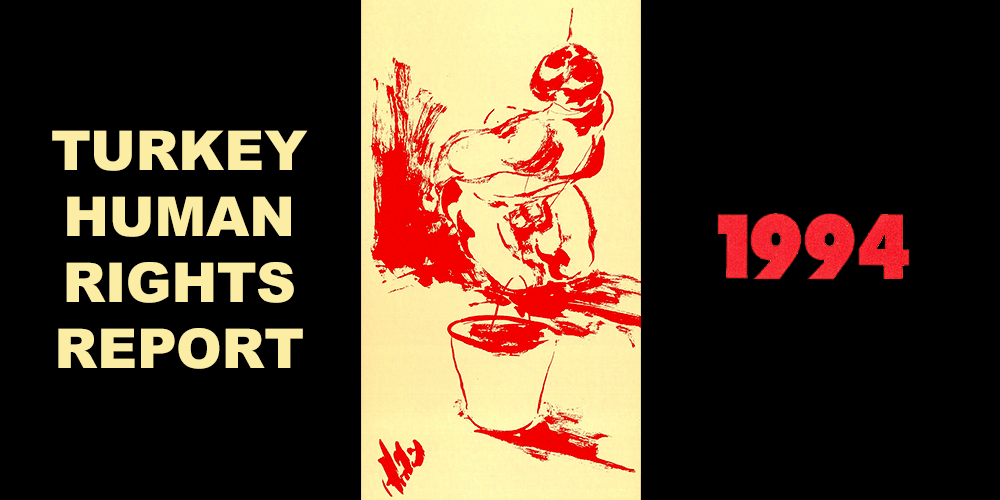 One more annual human rights report by the Human Rights Foundation of Turkey is being made public. This report, dealing with the human rights abuses observed in 1994 (*), was prepared by the Documentation Center of the HRFT. With the aim of informing and warning the public at home and abroad, as well as authorities, about human rights abuses, and enabling them to reach their own conclusions, we produced this report.

For this report, we assessed the news received from our own sources, newspapers, journals and other publications, evaluated HRFT’s daily reports, the information given by the Human Rights Association Headquarters and branches, and other human rights activists, as well as official statements and speeches of authorities at every level. Since we are an independent non- governmental organization defending human rights, the abuses originating from the structure and the characteristics of the regime that are caused by anti-democratic provisions of the Constitution and laws, or by the political power or public officers, are given priority. Nevertheless, taking into consideration the dimensions and extent of the violence in Turkey and its present situation, the acts and attacks carried out by certain armed groups, particularly by the PKK, were also assessed and included in the report.

While preparing the report, we were extremely careful about the accuracy of the information and the trustworthiness of the sources, and we tried to present the events objectively. Many reports which were obtained from just a single source, but could not be confirmed or were not reliable and deemed to be exaggerated, were not included in the report. During the preliminary studies, we behaved objectively and without any prejudice, in most cases we applied to many sources and examined some cases in-depth, causing a delay in the preparation of the report. We hope that any individual, organization, authoritative body or any circle that will read out our report will assess it without any prejudice and be objective in a similar way.

This human rights report includes 8 main sections, namely, “Introduction”, “The Kurdish Problem”, “Murders by Unknown Assailants”, “Extra-judicial Executions”, “Capital Punishment”, “Torture”, “Freedom of Thought, Press and Belief” and “Freedom of Organization”. These sections were divided into sub-sections, which include many samples. However, the examples do not cover all of the developments and abuses observed during the year; they only reflect a small portion of them. Therefore, one should take into account that there were many more human rights violations in 1994 than figures and examples show.
HRFT President Yavuz Önen’s article entitled “As for Foreword” which evaluates the human rights situation and presents human rights problems and enumerates the measures that should immediately be taken on this issue is also included in the report. In his evaluation, Yavuz Önen touches on the approach of the Foundation towards certain important subjects in Turkey and in the world in 1994 and gives information about the works of the Foundation, and the pressure and difficulties it faced.

During the 5-year period, the Documentation Center has prepared various reports along with its daily work, made these reports public in Turkey and abroad, and contributed to publicizing the activities of the Foundation. The reports are as follows:

The Documentation Center of the HRFT will continue to prepare such reports in the future. In order that such reports become more comprehensive, we ask interested individuals and institutions to forward their information and documents to us and to quote us their criticisms about the report.

Wishing that a peaceful future in which the human, human rights and freedoms are totally respected is very close, we present our respects to our friends who supported us and forwarded information and documents at every stage of our work, and to all human rights advocates with whom we have been struggling together for years.