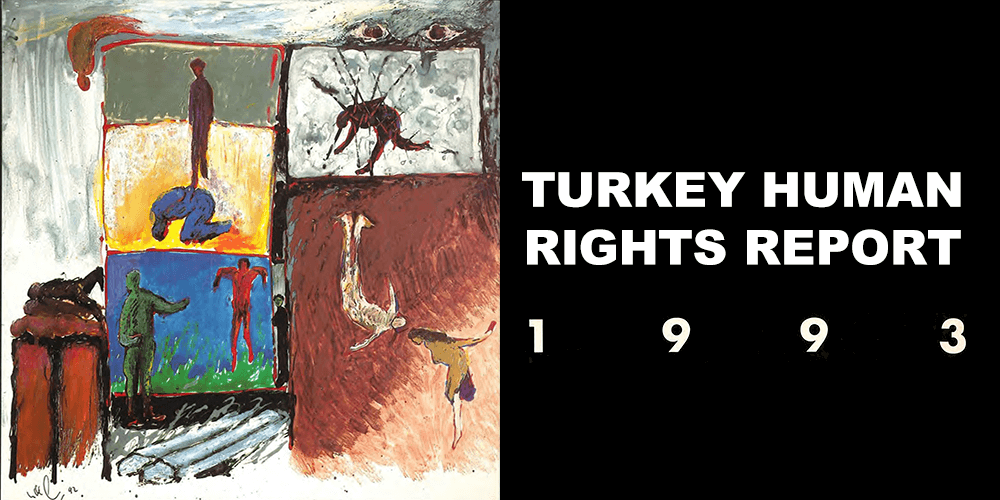 The traditional annual human rights report by the Human Rights Foundation of  Turkey is being made public even with a delay. The report dealing with the human rights abuses observed in 1993(*), was prepared by the Documentation Center of the HRFT. With the aim of informing and warning the public and governmental authorities about human rights abuses, and enabling them to reach their own conclusion, we produced this report.

For this report, we assessed the news received from our own sources, newspapers and journals, and evaluated HRFT’s daily reports and the information given by the Human Rights Association, its branches and human rights activists. While preparing the report, we were extremely careful about the correctness of the information and the trustworthiness of the sources, and we tried to present the events objectively. Many news which was obtained from just a single source, but could not be confirmed or was not reliable, were not included in the report.

Since we are an independent organization defending human rights, the abuses originated from the structure of the regime, caused by anti-democratic provisions of the Constitution and laws, or committed by the political power or public officers, are given priority. Nevertheless, taking into consideration the dimension of the violence in Turkey, the activities and attacks carried out by certain armed groups, particularly by the PKK were assessed and included in the report.

The human rights abuses in 1993, were studied under 8 main titles, namely, “The Kurdish Problem”, “Extra-judicial Executions”, “Capital Punishment”, “Murders by Unidentified Assailants”, “Torture”, “Freedom of Thought”, “Press and Belief”, “Freedom of Organization” and “Other Subjects”. These subjects were divided into subtitles, and many sample cases were given under each title. However, the examples do not cover all of the developments and abuses observed during the year, and even reflect a small portion of them. Therefore, one should take into account that there were many more human rights violations in 1993 than figures and examples show.

The HRFT’s Chairman Yavuz Önen’s evaluation entitled “General Situation of the Human Rights Following 1993” and HRFT’s General Secretary Mahmut Tali Öngören’s article titled “Where is Mega Media Running Towards” were also included in the report. In his evaluation, Yavuz Önen touched on the approach of the Foundation towards certain important issues experienced in Turkey and in the world in 1993. On the other hand, Mahmut Tali Öngören evaluated the approach of the written, verbal and visual press towards the human rights, and negative events witnessed on this subject. A digest of the HRFT’s activities in 1993 takes place at the end of the report.

Along with its daily works, the Documentation Center prepared various reports, made these reports public in Turkey and abroad, and contributed to the introduction activities of the Foundation during the 4-year period. Following are the prepared reports:

The Human Rights Foundation of Turkey will continue to prepare such reports in the future. In order that such reports become more comprehensive, we ask interested individuals and institutions to forward their information and documents to us. We thank all of our friends who supported us and forwarded information and documents. We want to thank all human rights advocates with whom we have been struggling together. A special thanks go to Muzaffer İlhan Erdost, a founding member who contributed to the formation of the cover of the report by giving one of his paintings, to Sue Hyde who was the proof-reader of the English version of the report and to the personnel of “MF-Tasarım, Tanıtım ve Yayıncılık” who undertook great efforts in printing the report.

We wish that 1994 will be a milestone for a peaceful future during which concrete steps will be taken on human rights and freedoms. We hope that all rights, first of all, the right to life, will be respected and that nobody will be killed. We also hope that 1994 will be the beginning of a future in peace.