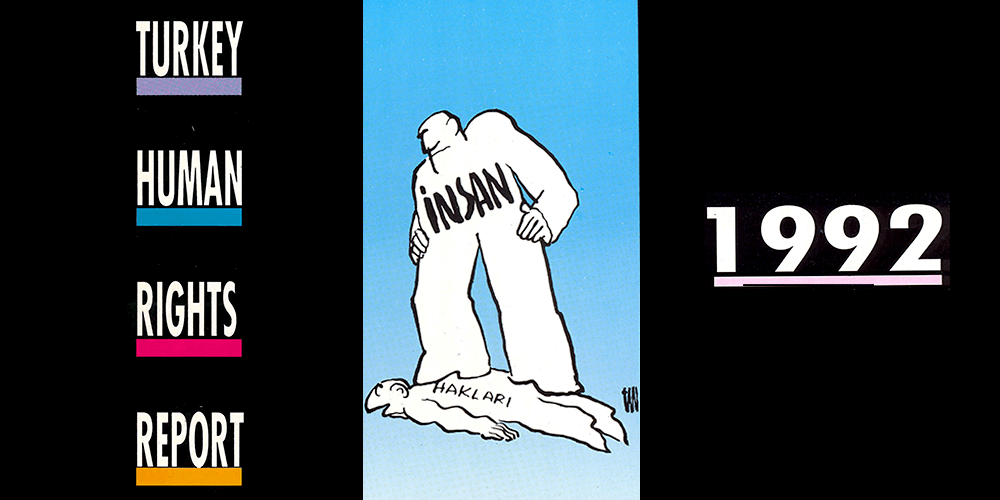 This report (*) dealing with the human rights violations observed in 1992, was prepared by the Documentation Center of the Human Rights Foundation of Turkey (HRFT). For this report newspapers, numbers of weeklies and monthlies and HRFT’s daily bulletins were reviewed. in addition, information and documents from branches of the Human Rights Association (İHD), human rights activists and other sources were assessed. While preparing the report, we were extremely careful about the correctness of the information and the trustworthiness of the sources, and we tried to present the events objectively. Many news, which was obtained from only one source, but could not be confirmed or were not reliable, are not included in the report.

With the aim of informing the public and government authorities about human rights abuses, and enabling them to reach their own conclusion, we produced this report.

The abuses originated from the structure of the regime, caused by anti-democratic provisions of the Constitution and laws or committed by the political power or public officers, are given priority, since we are an independent organization defending human rights.

The attitude of the Foundation towards certain important cases both in Turkey and in the world, and a summary of the work carried out by our foundation are given in the article entitled “General Evaluation of Human Rights Abuses” which was written by HRFT General President Yavuz Önen.

We could not include certain important human rights abuses such as women rights, rights of children and environmental problems. Because our means are restricted, we could not research and make the necessary evaluation. We did not have enough information and documents on these issues. We are aware of our deficiencies in these matters and hope to conduct studies in the forthcoming days to fill this gap.

The Human Rights Foundation of Turkey will continue to prepare such reports in the future. in order that such reports become more comprehensive, we ask interested individuals and institutions to forward their information and documents to us.

Results of the studies conducted in connection with the treatment and rehabilitation of individuals suffering from torture or prison conditions, which is one of the main aims of HRFT, will be gathered in a separate report to be prepared both in English and Turkish. This report will be made public at home and abroad in a short time. Therefore, we did not touch this subject.

We are commemorating journalist Uğur Mumcu who was assassinated by dark forces while our report was going to be printed. it was a great sorrow for all of us, that Uğur Mumcu who always supported human rights activists with his valuable criticisms, was killed.

We wish that 1993 will be a milestone for a peaceful future during which concrete steps will be taken on human rights and freedoms. We hope that all rights, first of all, the right to life, will be respected and that nobody will get killed. We believe that this report will help and give guidance to people who are aiming at providing a peaceful future.

We thank all of our friends who supported us and forwarded information and documents. We want to thank all human rights advocates with whom we have been struggling together. A special thanks go to Helmut Oberdiek who reviewed the English version of the report and to Değişim Agency, Baran Ali Yıldız, Ahmet Yıldız, and Ali K Karadeniz who undertook great efforts in printing this report.