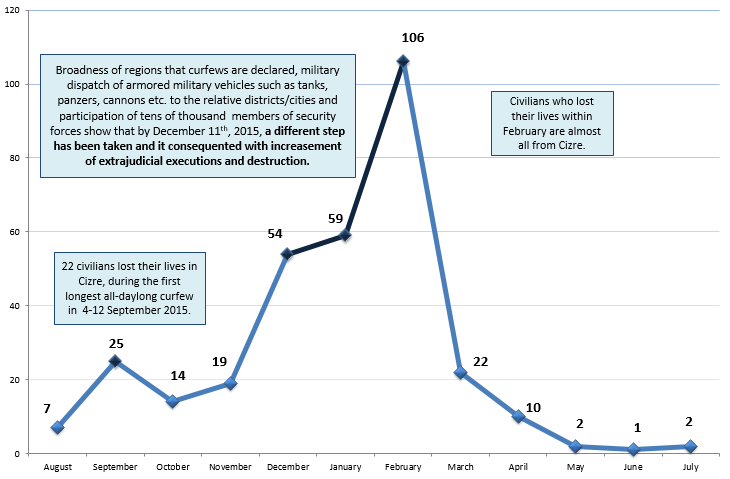 Curfews are implemented in southeastern Turkey since the collapse of resolution process in July 2015, yet their unlawfulness is even declared by the Venice Commission on their official Opinion on the legal framework of governing curfews.[1] The yearlong in-between August 16, 2015 and August 16, 2016 there has been at least 111 officially confirmed, open-ended and round-the-clock [all daylong] curfews in at least 35 districts of 9 cities in southeastern Turkey. These cities are as follow; Diyarbakır (61 times), Mardin (18 times), Şırnak (13 times), Hakkâri (11 times), Muş (2 times), Bingöl (2 times), Elazığ (1 time), Batman (2 times), Bingöl (2 times) and Tunceli (1 time). It is estimated that, according to the 2014 population census, at least 1 million 671 thousand residents have been affected by these curfews and fundemental rights of these people such as Right to Life and Right to Health are explicitly violated.

The imposement and results of the curfews should be interpreted as a whole. As mentioned before, as of December 11th, 2015 the form of continous curfews, the broadness of regions that curfews are declared, length of duration, military dispatch and using heavy weapons within the residential areas[2] and judicial processes in accordance with all these, showed that a much more severe process has been implemented.

Within this regard, it is necessary to remind that right to information, right to know the truth and freedom of obtainment of information is heavily violated, due to the severe human rights violations which are are already enlarged in our past fact sheets and in our common observation reports with other Organizations[3], and due to the violation of international documents which Turkey is a party to and especially since the declaration of state of emergency in July 20, 2016.

According to the data of HRFT Documentation Center, since August 16, 2015 until August 16, 2016 at least 321 civilians lost their lives in regions and periods of time that curfews were officially declared. 79 are children, 71 are female and 30 are over the age 60 within these people.

As of April 2016, it is seen that regions where curfews are imposed moved from heavily destructed central districts to subordinated villages and fields. Strikingly, these villages and fields are rather the evacuated ones under the ‘state of emergency’ from 1987 to 2002 in mainly southeastern Turkey and their population was exposed to forced migration during the 1990s.

Also, there are some facts that are not included in abovementioned datas or to the list of civilians who lost their lives: In Silopi district of Şırnak, a 7 months old still birth occured due to gunshot through the womb of the mother. Also, at least 16 people lost their lives by arbitrary shooting of security forces during peaceful protests against the curfews in streets/Squares close to curfew zones or by the use of chemicals such as tear gas where no operation was onging or any curfews were declared or due to the explosion of conflict wastes and landmines after the curfew is lifted/within the hours that it is not imposed.[4]

As it was stated in our previous fact sheets; the datas over curfews on periodic Fact Sheets and within the Daily Reports of HRFT Documentation Center are obtained through press review, official web sites of relevant public institutions, visual records, statements of witnesses and lawyers, observation reports of political parties and civil organisations and their personal witnessings etc. And whether get investigated and become definite or remain as claims and removed from the annual report if not proved.

As HRFT, even though we feel the same grief and concerns by each death, the reasons why the fact sheets of HRFT Documentation Center over the curfews only covered facts on civilians until now are both because of the responsibility that violation of right to life against civilians is high beyond comparison according to the past tens of years and the information given on security forces and militants are not to be confirmed and publicly announced yet due to deficiencies and contradictions.

However, our work on each and every person (civilians, security forces or militants) is ongoing in the light of all datas, evidences and witnessing etc. We would like to emphasize that likewise we are still collecting data on all names which are included/excluded now compared to our last list of civilians who lost their lives during the curfews.

NOTE: Within the context of this fact sheet the term ‘security forces’ is implying to ‘Police Anti-terror Combat Team, Police Special Forces, Gendarmarie Special Forces (Fatihler Unit, Efeler Unit, Dadaşlar Unit which were active units during 90s in the same region), Military Forces and Riot Polices.’ Also, there are some unofficial teams which are both by themselves and publicly defined as JITEM, Esedullah, Hançer[Dagger], Fatihler Teams etc.